Fantasy Flight Games know how to drop a bomb all right. Just when you think they’re all out of surprises for the year – and we’ve had doozies like the new Fury of Dracula, a Hoth-themed big box for Imperial Assault and a re-polished Runebound adventure game – they go and drop a new Star Wars miniatures game, and drop everyone’s jaws in the process.

FFG have already done wonders with the Star Wars license, knocking out dogfight simulator X-Wing, upping the scale for capital ship-focused Armada, and zooming right in again to ground combat in Imperial Assault. With Rebellion, which they announced out of left field on their website today, they’ve pulled out as far as they can possibly go, letting two to four players control the Galactic Empire or Rebel Alliance across a swathe of star systems during the time span of the original trilogy. What’s more, it’s slated for the first quarter of 2016, so we’ll be able to get our hands on it in no time.

Older video game fans might spot the similarities between this and the Star Wars: Rebellion (or Supremacy here in the UK) video game from the late 1990s, which also had you dispatching space fleets, ground troops and heroes from the films to battle over planets and win the civil war.

The video game was pretty dreary, but you’d be mad if you can’t get excited for this. FFG’s track record with the miniatures game licence has been superb, and if anyone can successfully boil down the entire galactic civil war into tabletop format with a bunch of beautiful miniatures it’s these guys. Speaking of miniatures, look at the goodies on offer: 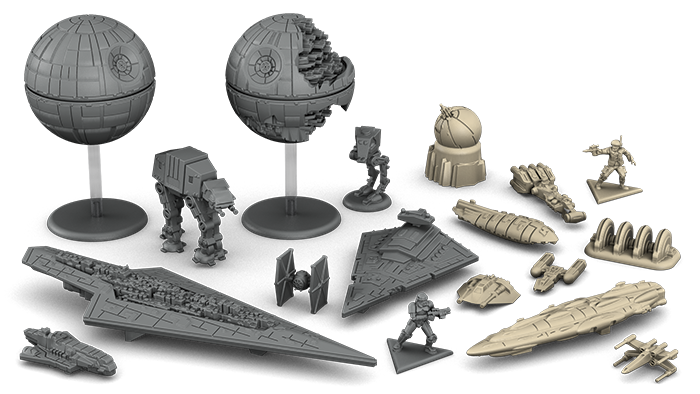 Yes that’s two death stars in different states of repair. And star destroyers. And X-Wings. And ion cannons, speeders, AT-ATs. What’s more, the game’s touted as being asymmetrical, so the Rebels start off at a massive military disadvantage, and will have to keep their secret base safe by relying on surgical strikes to slow the gargantuan Imperial war machine as it tramples the galaxy subjugating planets. Sway enough of the galaxy’s citizens to the Rebel cause, and you’ll inspire a full-scale revolt and win the game. FFG have also said that most of the galaxy’s thirty-two systems can generate resources, and if the Alliance can win the loyalty of those systems then they might slowly be able to generate a fleet and a military that can go toe-to-toe against the Imperial Navy.

There’s not much more detail in terms of game mechanics, barring ships in the game possessing attack dice and hit points. If both players have starships in a system, they engage in a space battle and then a subsequent ground battle. Leaders present might let you draw tactics cards to deal or block damage or spring other surprises.

It’s amazing to think FFG managed to keep this under wraps given it’s due for release so soon. Maybe because it’s so clearly  focused on the original trilogy, it didn’t fit in with winding up excitement for the latest movie hitting cinemas next month? Whatever that film brings – and I’d be lying if I said I wasn’t pretty excited – this will invariably be on my board game table come early 2016.

Let us know what you think in the comments below, and please click the social media bits just under these words to share the story around. Thanks!

More from The Boarding Kennel